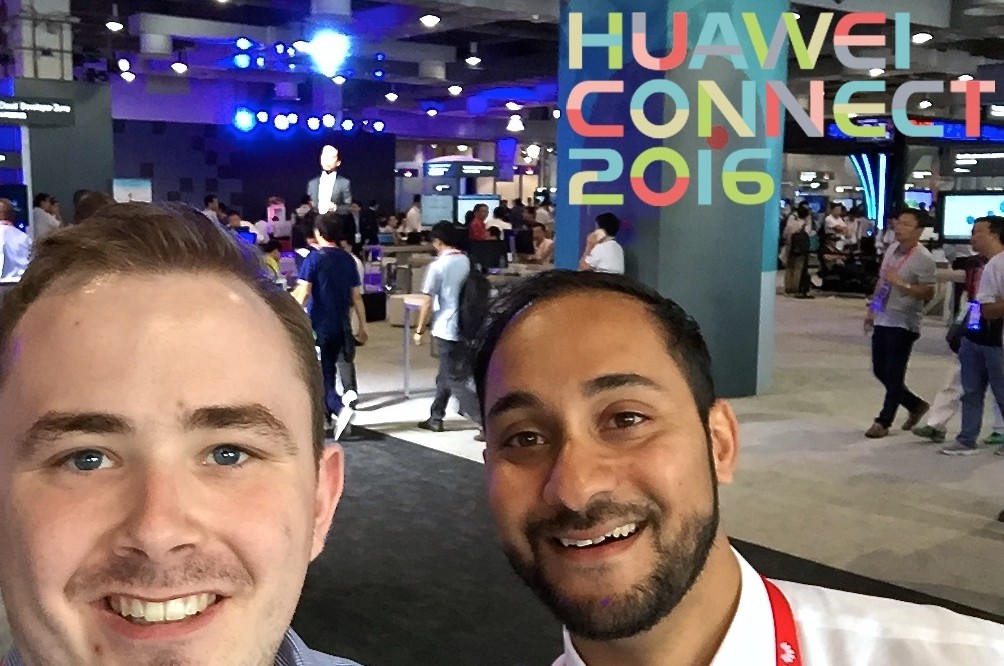 Senior Technical Consultant Simeon Banks and Account Manager Amer Hussain are currently in China attending the week-long Huawei Connect 2016 event in Shanghai, Shenzhen and Hong Kong researching new technologies on behalf of the Group. Over 20,000 industry leaders are attending to envision a Better Connected World, welcome the smart society, and shape the digital transformation of industries.

As you would imagine, this journey begins with a ridiculously early train journey, followed by some breakfast in Heathrow T5, and a 11-hour non-stop BA flight to Shanghai’s Pudong Airport.

I have been travelling with a colleague of mine (Amer) from our Wakefield office, and both of us have never ever been to China. The closest thing I have personally been to China is ordering a number 43 down at the local takeaway.

Following the train, and the flight we touched down at the airport, the first thing you notice about the country is the flatness of it all! Remember, I am from a place in Yorkshire where you have to put on walking boots just to get a pint of milk.

Following the slowest security process known to man, (unbeknown to us the latest G20 summit was about to take place) We made it out of the airport, and albeit a bit of a cliché the heat hit us like a brick wall, 32 degrees and 80% humidity. I think the correct term would be “sticky”.

Besides all that the next thing that you notice is that the normal rules of traffic and driving behaviour don’t apply in the slightest, a car journey anywhere is like a strange game of roulette, you don’t know if you will get to where you want to go, or in one piece!

All this aside, hotel found, checked in and a quick freshen up later we was ushered out on a tour of the shopping district in Shanghai, which is a modern version of the classic building in China, and very much built for us Westerners. McDonalds, Subway, Starbucks and fake designer goods galore! However, a word of warning from someone daft enough to do this, DO NOT haggle or start talking to one of the fake designer goods sellers in the area if you don’t have the intention to buy. They follow you everywhere afterwards!

After the wander, and a quick coffee to perk us up later we then got in another Whacky Racers taxi, this time it was to the Shanghai Tower, which is one of the tallest mega towers in the area! To which we were greeted with fabulous views looking over the city!

All the sightseeing aside, it was time to take another risk and get a taxi to the Bund Panorama restaurant, where we were greeted with the Huawei UK Welcome Dinner with a glass of something fizzy.

Tiredness now really kicking in, not a lot of drink was consumed other than some fabulous mojitos made by a cocktail maker at the event. The overriding thing about this particular venue was the view of Shanghai as the sunset and the city lit up, it was fantastic!

Once the introduction was done and over, and the meal of many Chinese dishes, most of which I can’t pronounce it was time for a good old-fashioned quiz!

Aside from this, I was interested as I had a chance to win a new phone (A Huawei P9 Plus!) questions were asked, which I got wrong…..apart from the last one! I WON! What I did learn however was that Newcastle University is currently using Huawei technology to create a 100GB/s Network. A 100GB/s network that’s bleeding fast! However, I bet YouTube still buffers…

Now after I had done the collection at the front of the massive hall, with a handshake for the VP of Huawei, it was time for some well-earned rest back at the hotel ready for the start of it all.